On the opening day of the season, Manchester United put four past Chelsea, as they opened their campaign with a 4-0 win over their rivals. Since then much has changed, and Frank Lampard has Chelsea sitting in the Champions League places, whilst Manchester United sit seven points behind them.

This was Chelsea’s first chance to avenge the previous result, yet United managed to seal a 2-1 win courtesy of an otherworldly free-kick from Marcus Rashford as well as a penalty from the young English forward too.

This tactical analysis focuses on the tactics used by both sides in this EFL Cup clash.

Ever since Sir Alex Ferguson became the first manager to rest players for the EFL Cup, it has become a relatively commonplace practice. It is understandable with the build-up of European fixtures at this time of year, as well as the busy Christmas period looming around the corner, to put the EFL Cup at the bottom of the priority list. However, it’s nevertheless an excellent chance to win some silverware early in the season that could springboard a team’s form for the remainder of the year.

Both Chelsea and United fielded sides that were a mixture of first-team regulars, youngsters, and squad players who have been short of first-team football. 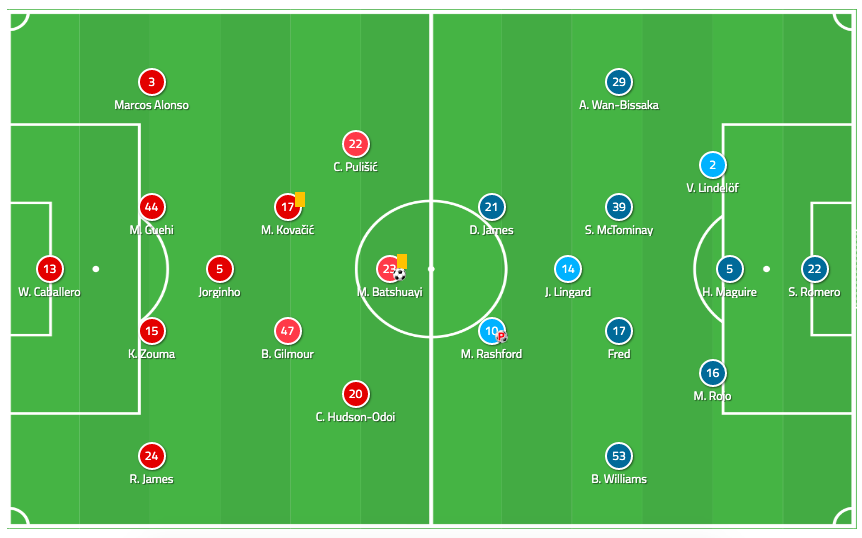 Ole Gunnar Solskjaer fielded a 3-4-1-2 formation, making it the third time they have used this formation in their last four games, with Marcos Rojo coming into the side to play alongside Harry Maguire and Victor Lindelöf. Academy product Brandon Williams and Aaron Wan-Bissaka played as wing-backs, whilst a midfield three was made up of Scott McTominay, Jesse Lingard and Fred. The latter are two players who are no doubt desperate to nail down a starting berth in the middle of the park once more, alongside their Scottish teammate. If fielding a formation which allowed United to protect the middle of the pitch, whilst also allowing their defence to form a back five, wasn’t enough of a clue that Solskjaer was looking to play counter-attacking football, then perhaps United’s chosen front two were a good clue. They opted for the endless running and pace of Daniel James, next to the equally quick Marcus Rashford.

To read the full tactical analysis of this match – Click here

If you love tactical analysis, then you’ll love the digital magazines from totalfootballanalysis.com – a guaranteed 100+ pages of pure tactical analysis covering topics from the Premier League, Serie A, La Liga, Bundesliga and many, many more. Buy your copy of the October issue for just ₤4.99 here

United’s victory at Tranmere lifts spirits, but fans give vent to...