With the breaking news that Manchester United are eyeing up AS Roma’s Spanish Director of Football, Monchi, to be their first ever DoF it felt right to share a piece first published on our sister analysis site totalfootballanalysis.com – it will explain what Monchi is very, very good at and why he would be a superb recruit at Old Trafford if he is allowed to do it his way.

Roma’s sporting director Monchi joined the club last summer with a reputation of something like a transfer wizard after more than a decade of success at Sevilla. His first season in Rome proved successful as signings like Aleksandar Kolarov and Lorenzo Pellegrini played important roles in a terrific season.

In case you missed it, Roma reached the semi-finals of the Champions League and finished third in Serie A. This summer has seen Monchi very busy with lots of ins and outs at the Trigoria training ground. High-profile players like Allison and Radja Nainggolan has left for big money and plenty of interesting players have joined. The key question is if the team is better than last season? In this tactical analysis, I’ll look at the main signings and how they fit into coach Eusebio Di Francesco’s tactics.

I’ve written extensively on Eusebio Di Francesco’s Roma tactics in the past but I’ll revisit it in regards to how the new signings fit in.

The Argentine playmaker returns to Italy after Roma paid PSG just short of €25m. Pastore left Palermo and Serie A in 2011 as one of the highly sought-after players on the continent. He returns with a reputation well below that. Still, Pastore has qualities that fit well with Italian football and will be a good option for Di Francesco.

Cristante is perhaps the new arrival with the best chance of starting, apart from Olsen. The goalscoring midfielder was a revelation at Atalanta last season in a very specific role where his late runs into the box saw him score twelve goals in all competitions. As I’ll discuss later, his profile fits perfectly with Roma’s style of play.

Kluivert, son of former Milan and Barcelona striker Patrick Kluivert, has been an exciting player to follow at Ajax in the last couple of seasons. On the pitch, Kluivert has impressed from the left wing with his dribbling and acceleration as he cuts in onto his stronger right foot. He’ll face strong competition from Diego Perotti and Stephan El Shaarawy as things stand, but the 19-year-old is definitely one for the future and he seems to fit in well.

Of all the new signings, Sweden’s number 1 goalkeeper has the most daunting task. After a strong World Cup, he joins Roma and Monchi’s transfer revolution as the replacement for Alisson. The Brazilian became the most expensive goalkeeper ever when he joined Liverpool last week after a stunning season in Rome. Olsen is very calm, a good shot-stopper and dominates his area well. He is, however, not anywhere near Alisson’s level with the ball at his feet. This can go either way.

Santon looked like Javier Zanetti’s heir apparent when he was given his debut by José Mourinho and nullified Ballon d’Or winner Cristiano Ronaldo in the Champions League in 2009. There and then Santon looked a fantastic prospect. Times have changed though. After a difficult time towards the end of his time at Newcastle, Santon has had some very inconsistent seasons at Inter without establishing himself as first-choice. He joins primarily as a back-up.

After four seasons at Porto, the experienced centre-back joins Roma to provide cover for Kostas Manolas and Federico Fazio. It seems a clever signing but he won’t be a regular unless something unexpected happens.

Mirante joins from Bologna after a string of decent seasons at Renato Dall’Ara for the Rossoblu. He replaces Skorupski as back-up but if Olsen doesn’t impress then he will have a chance to take the number 1 spot. If so, he won’t let anyone down as he’s a very capable goalkeeper.

I won’t act like I know much of this French 18-year-old centre-back but his €6m fee suggests Monchi has seen something special since Bianda only has five Ligue 2 appearances. He definitely seems to be one for the future.

Coric has been linked to clubs all over Europe for years now and it will be intriguing to follow the 21-year-old Croatian now that he’s left Balkan. Coric is a technical playmaker often playing in attacking midfield and that makes it hard to see where he fits into Di Francesco’s team. He could play in either of the two central midfield positions or as one of the wingers coming inside but the competition is fierce. Don’t rule out a loan to a smaller Italian club before the window closes.

Monchi has also signed Inter’s 18-year-old attacking midfielder Nicolo Zaniolo and Palmeiras 21-year-old goalkeeper Daniel Futzato but they are unlikely to feature in the league this season.

In possession, Di Francesco deploys multiple positional rotations between his players. I’ve illustrated a few below. 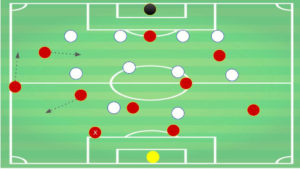 The above movement is very common in Di Francesco’s teams. The winger moves inside, the full-backs bombs on while a central midfielder drops into the left half-space to receive. 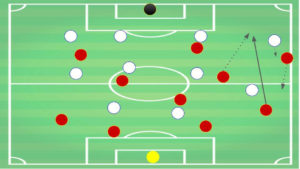 Above we see a common rotation where the winger makes a movement towards the ball while the central midfielder attacks the empty space behind the opposition left-back.

In the friendly against Tottenham Cristante already showed signs of grasping this role. In some ways, it’s similar to the way he used to play at Atalanta with deep runs past the striker. In the image below he quickly identifies the space behind the defensive line as the striker receives the ball. His movement means the pass can be played instantly and he can get beyond the defense. 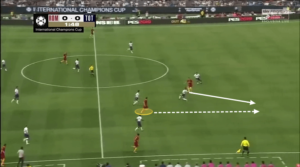 The striker is used as a target man with passes along the ground and sometimes in the air. The two central midfielders then make moves to get behind the opponent’s midfield to receive from the striker. Pastore will love these positions. 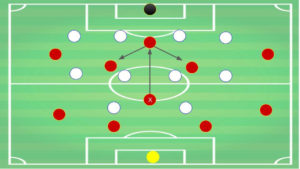 The main source of chance creation is the wing-play where wingers and full-back combine to create through-balls or crosses. When the ball is crossed into the box the ball-far winger and striker attack the ball while one of the central midfielders also attack the penalty area as seen below. This is another reason why Cristante’s goalscoring instincts will be a great asset to Roma. 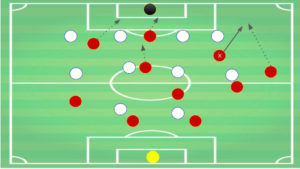 In defense, Di Francesco uses a man-orientated pressing scheme where he makes his side press high up the pitch. Roma are often very intense and are tough to build up play against. The issue has been a somewhat unorganized defense when the press is broken.

Again though, Cristante seems well-suited to this style. He’s spent a season and a half under the extremely man-orientated coach Gian Piero Gasperini so he knows how to press in this way. For others, it might be a bit of a surprise but it’s quite easy to adapt too.

Which signings suit this style?

Obviously, Cristante seems a match made in heaven. His season will be exciting to follow as he battles it out with Pastore, Pellegrini, Coric and Kevin Strootman to start in midfield. Pastore gives that midfield a touch of class and creativity the other options, apart from Coric, lacks.

Both seem smart signings in midfield. Olsen have big shoes to fill in goal and needs to improve with the ball at his feet. He might also have to get used to playing in a team that presses high which forces his starting position to change compared to with Sweden. Kluivert fits the profile of the left winger well but has fierce competition to start. Di Francesco did trust Cengiz Under on the right last season though so Kluivert will get his chances. Santon, Marcano, Mirante, Coric, and Bianda will be back-ups but still interesting to follow.

Monchi seems to have scouted well but with the losses of Alisson and Nainggolan, it’s going to take some time for the new signings to settle in. Is the team better? The squad is definitely better than last season but Cristante or Pastore needs to hit the ground running in midfield. And Olsen needs a good season between the sticks for Roma to enjoy another good season. Monchi, the transfer wizard from Seville, still may have a few aces up his sleeve after the deal to sign Malcom fell through. Stay tuned!

Diogo Dalot On His Promising Opening Night For Manchester United

Luke Shaw has his say on Jose Mourinho

Which Colombian World Cup star is Mourinho desperate to sign?

Yes, Jose Mourinho is grumpy but he has every right to...

Why Paul Pogba would be sorely missed by Manchester United