Ole Gunnar Solskjaer’s Manchester United were eventually outclassed by Arsenal as the Red Devils suffered their first domestic defeat under the supervision of their Norwegian boss. What’s more surprising is that the defeat turned out to be straight-forward, as the visitors conceded an early goal before playing an end-to-end battle with the Gunners and then conceding another goal – a penalty – in the second half.

This tactical analysis below explains why Solskjaer’s approach didn’t work at the Emirates, and how Arsenal were able to stop United by clinically hitting their weak points.

Manchester United started with a 4-3-3 tactical set up with Matic positioned in central midfield surrounded by Pogba and Fred. However, without the ball, United assumed a 4-4-2 shape which was also their dominant tactical formation throughout the game, because they conceded most of the possession to Arsenal.

Arsenal, on the other hand, deployed their usual 3-4-1-2 formation with Mesut Ozil behind the two forwards. This also gave the home team’s front players a 3v2 numerical advantage over United’s centre-backs. 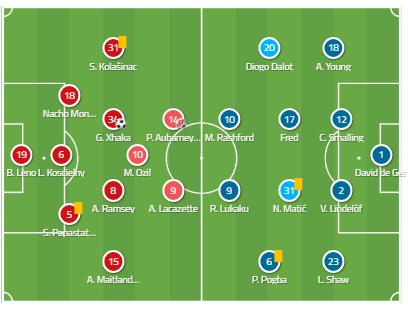 United got exposed through back line spaces

Who is Luis Campos? Mourinho’s Madrid Scout In Running for United...

Yes, Jose Mourinho is grumpy but he has every right to...