Manchester United sat only three points ahead of rivals Partizan going into this Thursday night UEFA Europa League game. Ole Gunnar Solsjkaer’s side went into this fixture, knowing a win would likely see their qualification into the knockout rounds with two games to spare. With pressure continuing to mount on Solskjaer a convincing performance was what was required, and United didn’t disappoint, running away with a 3-0 victory in front of the Old Trafford faithful. This tactical analysis will focus on the tactics used by both United and Partizan. 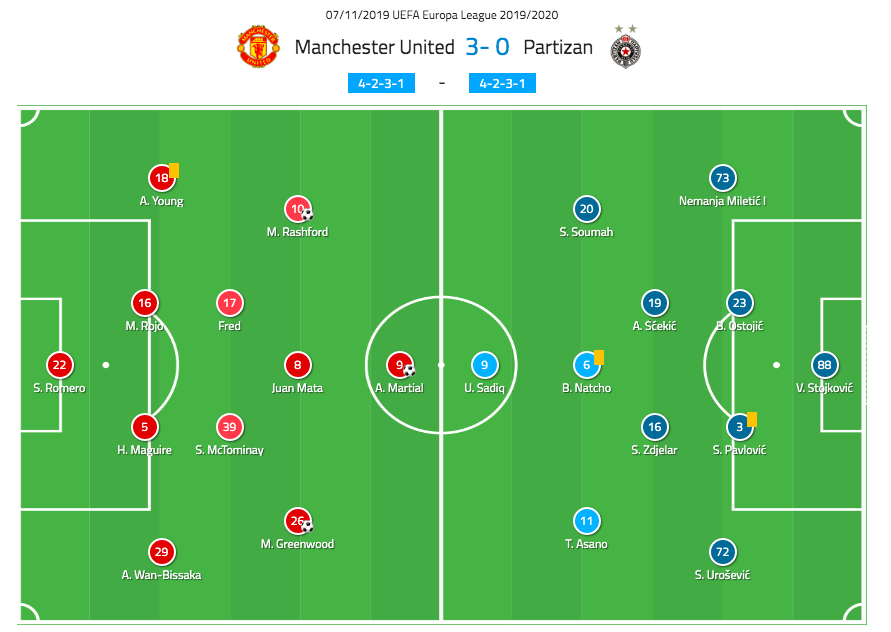 United fielded a 4-2-3-1. Aaron Wan-Bissaka and Ashley Young played either side of Harry Maguire and Marcos Rojo in defence. In midfield, Fred and Scott McTominay partnered one another in a deeper role, with Juan Mata sitting in front of them, whilst upfront Anthony Martial played as a central striker, flanked by the two homegrown attacking wingers in Marcus Rashford, and Mason Greenwood.

Partizan stuck to their guns and fielded a 4-2-3-1, a formation they have used in the majority of their games thus far this season.

Head coach Savo Milošević fielded a strong starting XI with the only changes to their normal personnel coming in midfield. Both Zoran Tošić and wonderkid Filip Stevanović found themselves on the bench, with Milošević perhaps concerned about overstretching in attack. Bibras Natkho was played in the 10 role with Seydouba Soumah pushed to the right-side of midfield.

If you want to read the full tactical breakdown of this game, head over to totalfootballanalysis.com or click HERE

If you love tactical analysis, then you’ll love the digital magazines from totalfootballanalysis.com – a guaranteed 100+ pages of pure tactical analysis covering topics from the Premier League, Serie A, La Liga, Bundesliga and many, many more. Buy your copy of the November issue for just ₤4.99 here

Building the Bus: Which combinations might work out for the United...

Assessment of the world’s most expensive defender so far

Lingard Was Busy Yet Moura Was More Productive