Manchester United manager Ole Gunnar Solskjaer had enjoyed the gentlest possible introduction to life at Old Trafford. Four games in the Premier League against modest opposition, along with an FA Cup tie versus Championship side Reading, meant that the Norwegian was able to generate a run of wins and allow the feel-good factor to return to the club.

Sunday’s game against Tottenham Hotspur at Wembley was his first test against a top side. The game had an added layer of intrigue due to Mauricio Pochettino‘s links to the job at Old Trafford as well. It was billed as an audition for the permanent manager’s role at Manchester United, and a chance for Solskjaer to show the world that he wasn’t just a motivator, but that there was tactical nous behind that baby-faced smile.

Mauricio Pochettino welcomed back Jan Vertonghen from injury, while Ben Davies played instead of Danny Rose at left-back. Injuries in midfield meant that Spurs went with a diamond – Harry Winks at the base, Christian Eriksen and Moussa Sissoko flanking him, and Dele Alli playing behind Harry Kane and Son Heung-min.
Ole Gunnar Solskjaer selected the same side as he had in his first game in charge against Cardiff. Ashley Young captained the side from right-back, with a midfield trio of Paul Pogba, ex-Chelsea enforcer Nemanja Matic and Ander Herrera. Jesse Lingard, Anthony Martial and Marcus Rashford formed a pacy front three.

Jesse Lingard has risen in prominence under the new manager. The Englishman’s movement, positional awareness and skill on the ball have been perfectly suited for the high-tempo brand of football that Solskjaer is trying to instil at United. While previously deployed on the right flank, he was part of a tactical surprise by the Norwegian at Wembley. Lingard started centrally, almost like a false nine of sorts, while Martial and Rashford played as split strikers ahead of him.

This completely caught Spurs and Pochettino by surprise. Lingard dropped deep to link up with the likes of Pogba and Herrera, while Rashford and Martial stayed high and wide. This meant that the two Spurs centre-backs, Vertonghen and Alderweireld, always had a direct opponent, which is a rare occurrence in modern football, where the two centre-backs usually deal with one striker.

Lingard’s positioning also negated Harry Winks’ influence, at least in the first half. The United man dropped onto Winks when out of possession, shutting down passing lanes to him and thus disrupting Spurs’ build-up.

Jesse Lingard has always been a slightly unheralded part of the United line-up. However, his tactical intelligence and awareness are invaluable. As he showed at Wembley, they can be devastating if applied correctly.

United win the battle of the full-backs

Another key aspect of Solskjaer’s United has been the high positioning of the full-backs. Shaw and Young have pushed high into the opposition’s half, maintaining width for United attacks and stretching the opposition’s defence. This tactic was always unlikely to be used against Spurs though, given their general quality and their excellent counter-attacking.

Young and Shaw were both a lot more reserved than usual, sitting deeper and only looking to venture forward when the move was fairly developed. Even then, they rarely did so together, with one of them always sitting back to provide extra protection. Their touch maps from this game will show just how conservative they both were.

One of the rare occasions when Young was caught up the pitch resulted in Spurs attacking United’s right-back zone, with Kane darting into the vacant space.

In general though, United were fairly untroubled down the flanks. The same cannot be said of Tottenham though, especially in the first half. Their full-backs bombed forward, which was foolhardy in the extreme, given that Rashford and Martial were both staying up the pitch to counter-attack into those vacant spaces. United’s goal owed a lot to the Spurs’ full-backs and their adventurous positioning. 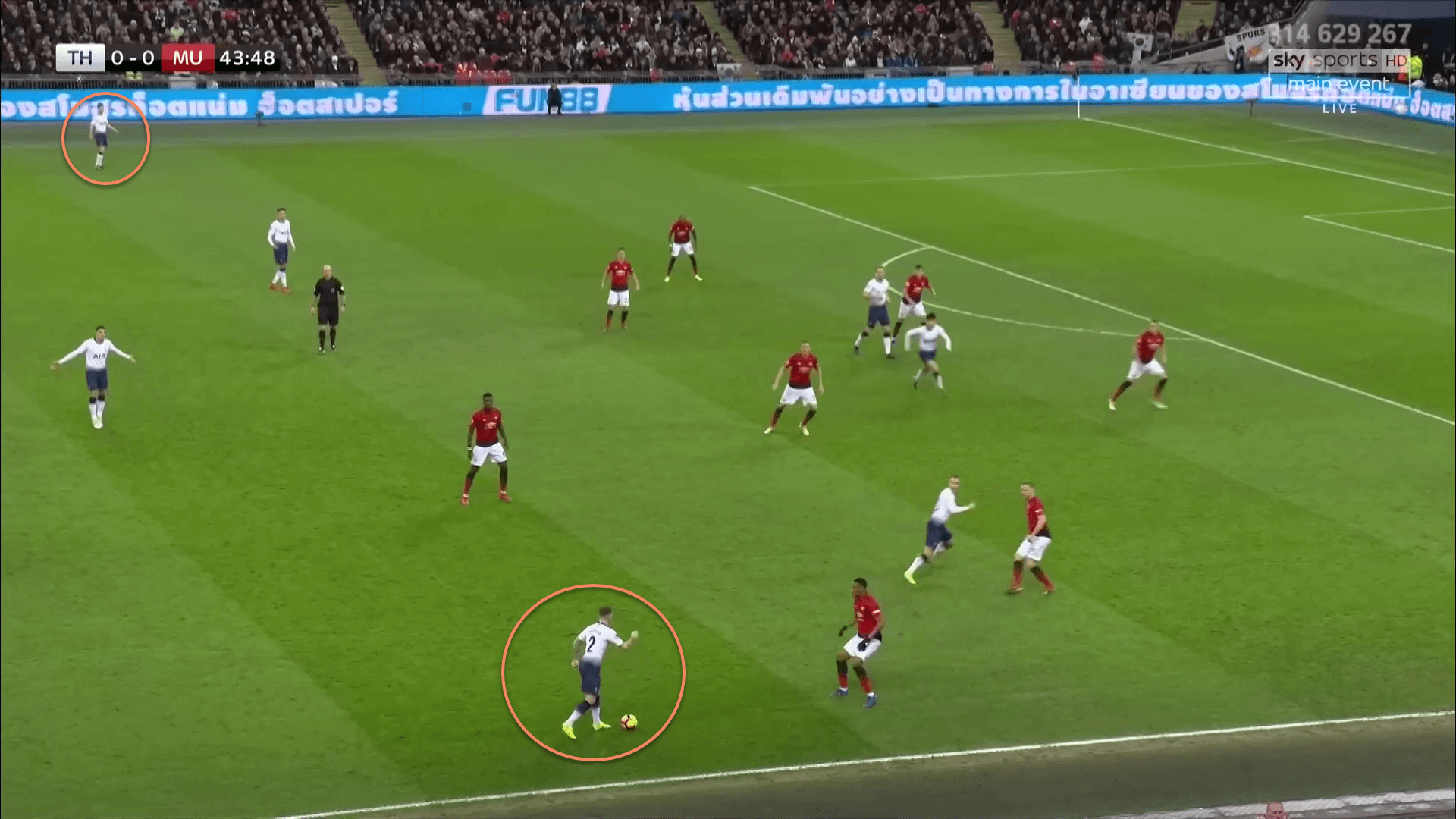 Just before Trippier gave the ball away to Lingard – note how high up the pitch the two Spurs full-backs are.

Pochettino is a masterful tactician, and he recognized that his midfield diamond was not helping protect the flanks. He changed plans at half-time, moving to a 4-2-3-1. Winks and Eriksen played as the deep midfielders, while Lamela (who had replaced the injured Sissoko) and Son went out wide, and Dele took up a position behind Kane.

The full-backs sat a little deeper, and suddenly United did not have the space to counter into which they had enjoyed in the first half. Moreover, Son and Lamela stretched the United defence, which created space for Kane and Alli.

Lamela was always looking to come inside, thus opening up the right flank for Kieran Trippier. United began to drop deeper and concede space in midfield. Alli, Eriksen and Kane all attempted to take advantage of this but found De Gea in inspired form. As Pochettino said post-match, there was not too much wrong with what Spurs did in the second half; they just came up against a quality goalkeeper. Tottenham created a number of chances through this change in formation, and could have probably won the game had they finished better.

This represents something akin to a tactical rabbit out of the hat from Solskjaer. His inspired selection of Jesse Lingard as the central attacker worked out perfectly in the first half, but United got lucky in the second half, as Spurs’ formation change should have won them the match.

David de Gea was in world-beating form, however, and this win was truly a statement that Solskjaer can hold his own against the big boys. This makes it six wins from his first six games for the Norwegian now. He is the first United manager ever to achieve the feat, and with Brighton at home up next, that record should get extended further.

If you love tactical analysis, then you’ll love the digital magazines from totalfootballanalysis.com – a guaranteed 100+ pages of pure tactical analysis covering topics from the Premier League, Serie A, La Liga, Bundesliga and many, many more. Pre-order your copy of the January issue for just ₤4.99 here, or even better sign up for a ₤50 annual membership (12 monthly issues plus the annual review) right here.

“Fernandes is going to be a legend” – Dalot

‘Proven his quality’- Signing Timo Werner is a no-brainer for Manchester...