Manchester United Women have wasted no time in looking to establish themselves as one of the top sides in England’s top flight. After consecutive 1-0 defeats to juggernauts Arsenal and Manchester City Women, the Red Devils have won three in a row, and sit 4th in the table after five matches. Manager Casey Stone has implemented tactics that produce a very dangerous attacking side that remains sound at the back. In this tactical analysis, we will look at how Manchester United Women have started their first season in the FAWSL. 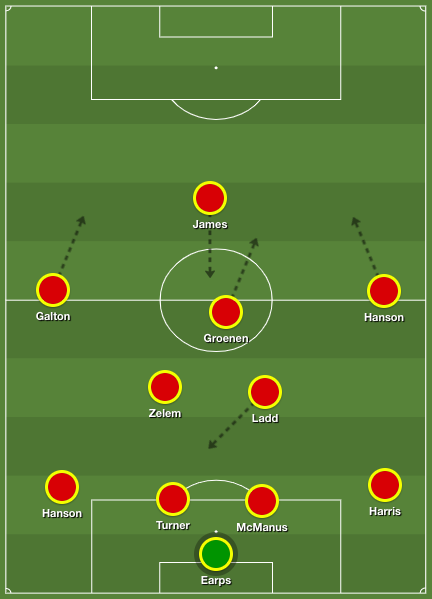 Stoney experimented with a couple of different lineups to begin the season but looks to be finally settling in on her best eleven. Manchester United Women line up typically in a 4-2-3-1 formation. Young star Lauren James has become the side’s focal point up top and gives them a lot of options as they go forward. Out wide, Leah Galton has been electric down the left side, causing opposition’s defences all sorts of trouble. Kirsty Hanson and Jessica Siggsworth share time on the right-hand side, with both offering specific abilities depending on the match at hand.

In midfield, Hayley Ladd and Katie Zelem form a double pivot that is the centre of everything Stone’s side does. Their defensive protection allows Jackie Groenen to sit in her normal higher-right position and make the line splitting passes she is known for.

In defence, Abbie McManus and Millie Turner occupy the centre-half positions normally. This is a big focus for the side as we will discuss later on.

If you want to read the full tactical breakdown of this game, head over to totalfootballanalysis.com or click HERE

If you love tactical analysis, then you’ll love the digital magazines from totalfootballanalysis.com – a guaranteed 100+ pages of pure tactical analysis covering topics from the Premier League, Serie A, La Liga, Bundesliga and many, many more. Buy your copy of the October issue for just ₤4.99 here

Revamping the squad: United are in negotiations with Antony

On The Left Side: Courtois goes shopping, transfer deadline day and...

Mino Raiola is Causing Problems at United Once Again

Bulletin: Update on Sir Alex and a potential Martial departure and...